I had a quiet Sunday morning catching up on reading (not the news, which is too depressing, nor Facebook, where the oversimplifications of the news on all sides just fill me with rage) while Adam was working at Hebrew school and then at our neighbor's house helping him install cables in his guest room. Then we went to Seneca Creek State Park, whose leaves have mostly fallen though downtown Gaithersburg on the way there still had plenty of red-gold on the smaller trees. There was a lot of evidence of Hurricane Sandy -- flattened grass and small plants for many feet on either side of the creek, cracked and fallen trees, and the water is still pretty high -- but we got to see a gorgeous sunset, and the winter lights have been set up, so that we got to see them turned on for a special event just as we were leaving beneath a gorgeous sunset: 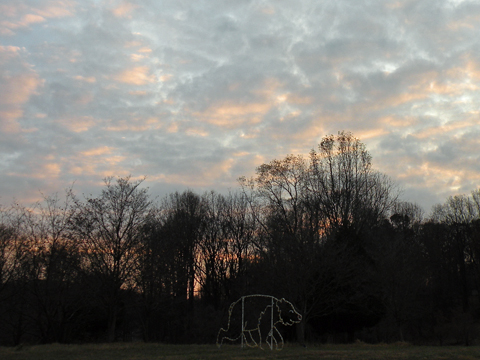 On the way home we stopped at the Whole Foods in Kentlands, which was absolutely mobbed with Thanksgiving shoppers; you'd have thought snow had been forecast. We were just looking for vegetarian frozen food since this is a weird eating week (Thanksgiving was never my favorite food holiday even when I ate turkey, I much prefer Passover). Much to my pleasure, the Redskins blew out the Eagles, which is satisfying even without Michael Vick playing. We had leftovers for dinner but they were awesome -- Tuscan potato soup and Moroccan chick pea chili -- then watched the Ravens-Steelers game, both teams suffering from major injury problems so it was a good, close game, and Baltimore pulled it out in the end which made it that much better!
Collapse