We spent Sunday afternoon at the National Geographic Museum downtown -- first at the Birds of Paradise: Amazing Avian Evolution exhibit, then the 1001 Inventions: Discover the Golden Age of Muslim Civilization exhibit, and then the Desert Air: Photographs by George Steinmetz exhibit. The first one, an eight-year expedition by two Cornell evolutionary biologists to study every species of bird of paradise in New Guinea, was my favorite, partly because the birds themselves are so spectacular and partly because I enjoyed hearing about the things they needed to do as photographers to capture images of the birds. The Muslim exhibit was targeted more towards kids and teens, but it started with a short movie starring Ben Kingsley about Islamic scientific contributions and I learned a bunch about architecture and medicine in the Muslim world during the so-called Dark Ages. The photos were taken mostly from above and were spectacular, especially the remote regions of Asia. 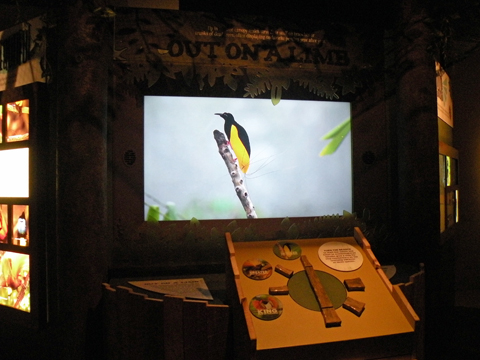 We had parked in front of the Cathedral of St. Matthew the Apostle, which had its inner doors propped open when we got back to the car. I had never seen the inside of the cathedral and was struck by how gorgeous it is, so we stopped inside for a few minutes before heading home. After catching the very end of the Ravens game, which they won in an overtime nail-biter with their new and apparently worthy kicker, we had dinner with my parents so they could see Daniel before we took him back to school. Then we picked up Daniel's laundry and fencing stuff from home and drove him to College Park, arriving home just as Once Upon a Time was ending -- we had recorded it, so we watched that before the Giants-Packers game which sadly did not go well for Green Bay.
Collapse