I had a fairly quiet Friday. I spent the morning working on a review of Deep Space Nine's "Visionary", an episode I really didn't remember and really liked on this rewatching; it's interesting watching episodes now without seeing them through the distraction of being in love with Voyager, which left most of DS9's third and fourth season as something of a blur to me. My cats helped me eat a bagel for lunch ("helped" here having the meaning of "practically sat on") and while walking in the gorgeous cool weather I saw two bunnies, to my surprise, as I hadn't seen any bunnies in a couple of weeks and had figured they were already hibernating.

We had dinner with my parents minus children, since Adam stayed at tech for the school show that opens next weekend. Then we came home and watched Nikita, which seems too convoluted even to me who's followed it since the start, and Arrow, which I'd never seen before but rather enjoyed despite some uneven acting and comic book dialogue because hello, John Barrowman and the Borg Queen. Here are some photos from Little Bennett Park of the huge burrows built by the Allegheny mound builder ants, the largest such colony in my county: 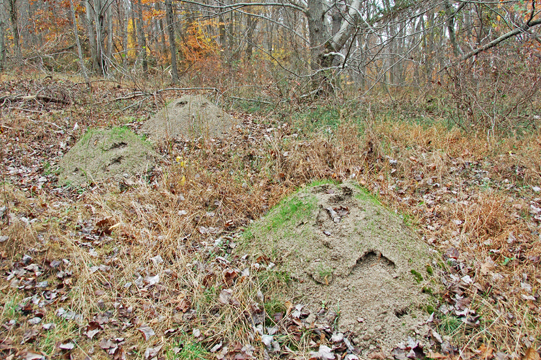