Saturday was a bit chilly but gorgeous here and we did a lot of walking outside. Adam spent all morning and half the afternoon at tech for the winter school show, so after an early lunch, Paul and I went to Garrett Park, where the Montgomery Potters were having their annual show and sale at the town hall. There were several rooms of really gorgeous pottery -- some whimsical, some utilitarian, some just plain beautiful -- and most of it was very affordable, so that was really lovely. Then we walked all the way through the town of Garrett Park, where we often used to take walks in the '90s when we lived just over the border in Bethesda, down to the edge of Rock Creek Park and back up the other side to the building that houses the train station, post office, and bistro. 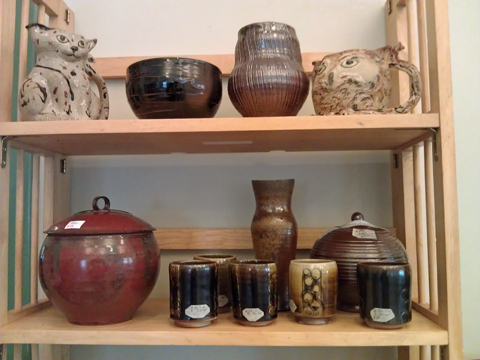 We came home to retrieve Adam, who bought himself a refurbished Canon as an early Chanukah present and wanted to try it out, so we went to Great Falls near sunset. It was colder but there were very few people as a result -- a couple of bikers, some kayakers on the way out of the park -- and the river was gorgeous. After dinner we all watched Hugo, which we all loved -- it's a real love letter to movies, the cinematography is truly magnificent, it has half the adult Harry Potter cast in supporting roles. Some elements of the story are very predictable, in particularly the women's roles, but the performances are pretty good given the stylized animation and the young characters avoid annoying kid stuff, so it's quite delightful. On, Wisconsin, but I guess I will be ignoring the BCS championship!
Collapse