On Sunday we picked up Adam from my mother's house, where he went for lunch after working with her at Hebrew school, and went on the Countryside Artisans' winter tour. We started at Art of Fire, which in addition to glassblowing had several other artisans displaying jewelry, beads, pottery, prints, and cards. Then we went to A Paca Fun Farm, which strictly speaking is not on the tour but has more than 100 adorable alpacas and sells both their fiber and items made from it. Dancing Leaf Farm and Sugarloaf Studio are next door to each other within view of the mountain, with wool, jewelry, crafts, and fine art, and we finished up at Tiewyan, another collective of artisans selling crafts and jewelry while their sheep munched outside in the drizzly sunset. 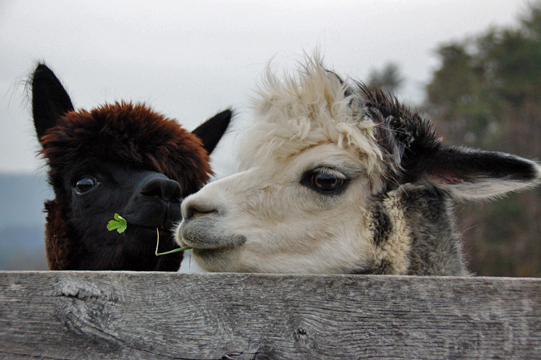 We got home in time to watch the Ravens blow their game against the Steelers when they could have clinched a playoff spot with a victory, waah. After dinner, we watched Once Upon a Time, which is going on hiatus for a month so of course they left everything hanging (and is it just me or has Henry gone from being a rather sweet kid to being not only the bossiest, most annoying character on the show but one of the most annoying zealot-like characters anywhere on television?). Now we are watching Dallas trounce the Eagles, which I care about only because if the Eagles had a decent backup quarterback they might give him the starting job over Vick -- it's not likely to affect the Redskins, who have made their own bed this season despite RGIII!
Collapse