While Washington was pulling out an overtime win over Baltimore in a game contested within my own family as well as throughout the region (Paul and I were rooting for the Ravens, Dad was rooting for the Redskins), my family was at Churchill for the annual Blast show, whose theme this year was "American Bandstand" -- there were even audio clips of Dick Clark. There are some really great singers at the school and I ran into several friends waiting to see their own kids, their kids' friends, and their friends' kids. Here are some photos, including Maddy in "Living in America" and "Hey Good Lookin'" and Adam's friend Daniel singing lead in the Village People's "Go West"! 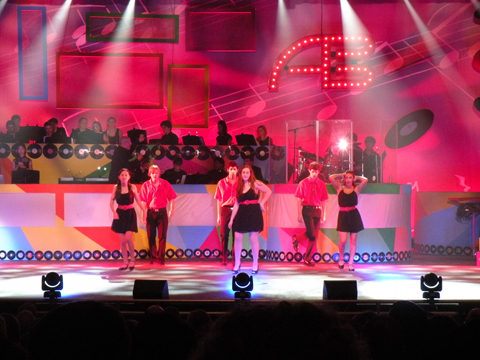 We came home briefly so Adam could walk the neighbor's dog -- he had worked at Hebrew school before call for the show, where he runs spotlights -- then we went to my parents' for Chanukah dinner before Daniel had to go back to College Park to study for finals. We had latkes and Paul made me a chocolate and pistachio birthday cake since Daniel won't be here on my actual birthday. When we came home we caught the very end of the Alfie Boe concert we were recording off PBS since we failed to do so last time it was on, then watched the snowy Detroit/Green Bay game, which made me just as happy to be on my couch with two cats and a blanket over my legs.
Collapse