I don't have anything profound to contribute to today's horrible conversation except to express my sorrow. I strongly disagree with the White House that this is not the time to discuss gun control -- this is precisely the time to discuss gun control -- when the Second Amendment was written, a person who could reload three times in a minute was considered extraordinary, so I believe it's well past time to consider a new amendment -- but I'm too drained to do it properly tonight. Here is my review of Deep Space Nine's "Through the Looking Glass". It may be somewhat incoherent because I was watching the news while writing it and it was really hard to concentrate on an episode where violence is all in good fun.

I had a very nice belated birthday dinner with my mother and Paul -- Adam was working on American Bandstand and my father is out of town on business. We went to Seasons 52 in Rockville, where I had excellent goat cheese ravioli and kept swiping the grilled butternut squash on Paul's plate. Plus they gave me a mini pecan pie for my birthday. When we got home we watched this week's Merlin, which was pretty good heading into the show's endgame, and the Glee superhero episode because we wanted something mindless. Here are photos from Richmond's Lewis Ginter Botanic Garden, whose theme for the Dominion Gardenfest of Lights this year is East Meets West, so everything from the giant tree to the model train is Asian-influenced: 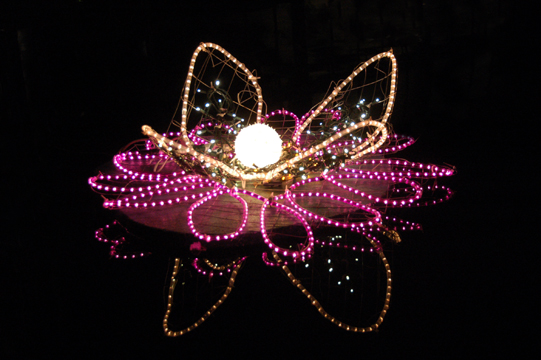