The last night of Adam's show (and the cast party) was this Saturday, and he needed to arrive early for the pre-show festivities, so we had a very low-key day beforehand. I finished up holiday cards and reorganized DVDs and jewelry to make room for Chanukah and birthday gifts (not a chore I ever mind). We had a couple of bowl games on TV, but apart from the goofy Idaho potato hats, I paid little attention. We also watched the Beavers movie, one of the aforementioned Chanukah presents -- the IMAX film about Canadian rodents, not whatever your dirty mind is thinking!

In the evening we watched a recording of the Australian stage production of Love Never Dies, the Phantom of the Opera sequel. I'd heard the music and liked it, and the production is terrific, but I still have big problems with the story, largely based on the way things have to be set up to try to make us forget how many people the Phantom killed in the original story and to give us some plausible reason Christine wouldn't run away screaming when she found out he was manipulating her again. ( Collapse ) Some more photos from Lewis Ginter Botanic Garden's Dominion Gardenfest of Lights...the sea monster, the peacock, the penguins... 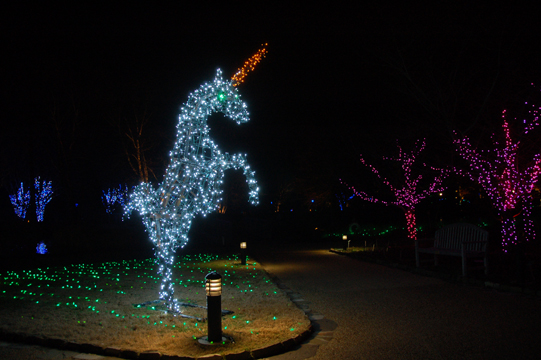