Greetings on the longest night of the year -- since the solstice takes place early Friday morning, Friday night will be a bit shorter even if the day is the shortest of the season. That is, of course, assuming there is a Friday night -- I must admit that the number of memes, jokes, and conspiracy theories about the Mayan calendar is a bit disconcerting -- if there's an end of the world in my lifetime, I fully expect that currently living humans will cause it, not Nostradamus or Gangnam Style.

Daniel slept till well after noon, apparently catching up from finals week. I made him get up when I went out to walk, which I did early because my kids had an afternoon dentist appointment. The soon-to-close mall in which the dentist's office is located was nearly empty -- I got in and out of Claire's (where son bought a rainbow scarf and I bought a Paris charm bracelet) in minutes with no lines -- except for the wait for the kids' train that drives around the mall and the wait to see Santa.

I had a Deep Space Nine two-parter to watch for review, and afterward Daniel said we could put on the Voyager Borg episodes. It's very strange watching "Scorpion" now, when I have no particular devotion to any of the characters: I was totally in Camp Janeway when I first saw it, and this time she sounds like Captain Nemo to me. Also, when I watch Jeri Ryan without bitterly resenting her because they hired her for her boobs, she's really very good. For the long night, a Great Falls sunset: 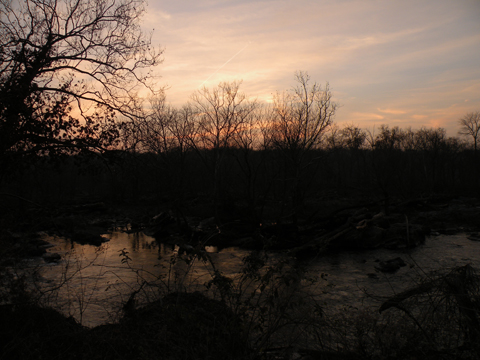