I had a bunch of work to get done on Friday, so much that I didn't even get to Bath & Body Works' all-shower-gel-is-$5 sale. Daniel went out to lunch with my father; Adam had his last day of school before winter break. FedEx tried to deliver me a brand new computer, on which it was fortunate for their seasonal delivery guy that I checked the address, because he were off significantly and I could have had a free computer. Here is my review of Deep Space Nine's "Improbable Cause" and "The Die Is Cast" -- I figured I had better do both parts together in case the world ended, ha. It was actually snowing when I went out to walk (mid-afternoon, it being the shortest day of the year), but it wasn't cold enough to stick and it stopped by the time we left to have dinner with my parents.

When we came home we couldn't track down the Arrow rerun so we ended up watching The Dark Knight Rises, which I feared that I would hate as much as its immediate prequel, but I liked Batman much better in this one, it seemed like there was more Gordon, and Catwoman was completely awesome. Also, I was delighted to see The Person Whose Presence May Still Be A Spoiler For Someone Besides Me, and did I mention that Catwoman was awesome? Here are some photos from the lower level of Maymont, the mansion in Virginia whose kitchen, laundry, butler's and maid's bedrooms, and pantries have been restored to show how the African American domestic help lived and worked during the Gilded Age. 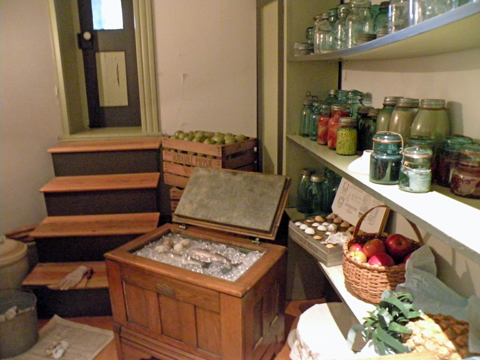