We had a white Boxing Day as well as a White Christmas -- until late afternoon, anyway, when the rain overtook the snow and melted what was on the ground -- so instead of risking driving in it, we had a quiet day at home. Adam cleaned out one of the closets in his room where we've been storing stuff since before he was born, so we had a very entertaining afternoon looking through old kids' school papers and various ancient computer parts. I found all of the KMAS papers and had a great time being nostalgic about the fan club on Facebook with the nearly 60 former members I'm friends with there; I also scanned some of my kids' photos and school papers, which I am not sure they found as hilarious as I did.

Though I hadn't been in a big rush to see it, I was inadvertently spoiled for the Downton Abbey Christmas special from a forwarded article this morning, and I must confess that the spoiler made me start laughing -- I know I keep complaining that it's become pure soap opera but this sounded over the top even by previous standards -- so I went and tracked the episode down. I'm afraid I've completely stopped feeling anything for the characters as such, they all seem like pawns rather than people; I'm trying to decide whether the pleasure of laughing at the Dowager Duchess's barbs make it worth following the show. Some photos from DC's Cathedral of St. Matthew the Apostle in honor of the season: 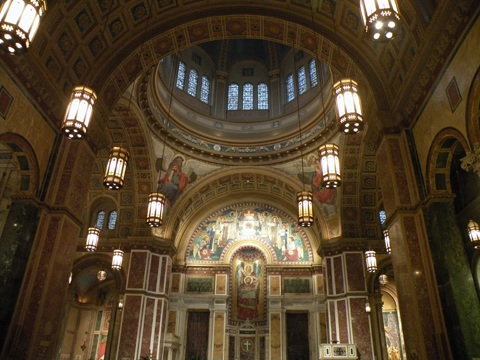