I finished most of my work in the morning, though none of my chores so don't come look at the living room, so I went out to lunch with my mother and Daniel, who already had plans. We went to Mosaic Cafe, which will put anything on a waffle -- Daniel and mom had waffle sandwiches, I had eggs benedict on a waffle, and we all shared chocolate mousse which was pretty awesome. The restaurant was two minutes from the shop where Adam's bike was being repaired, so we went to pick that up, then we stopped in Fresh Market for various food stuff, then we picked up Adam himself who had stayed after school to work out with cross country friends.

I wish I could get excited about the Critics' Choice Awards or Oscar nominations, but I really have no passionate feelings. I saw some very good movies this year and some movies that I enjoyed though they weren't necessarily very good, and there are some supposedly very good movies that I have no intention of seeing on the big screen because they are too violent and manipulative. I snicker that every single supporting actor nominee has an Oscar already and a nine-year-old got the nomination widely expected to go to Helen Mirren. I am sorry Tom Hooper didn't get a nomination but pleased that two directors everyone expected to be overlooked got in instead of him and Ben Affleck. There is not a single category this year where there's someone I consider a must-win-or-I'll-be-irate.

Elementary finally brought Moriarty close enough for me to think there may be an arc next season (if there is a next season), though I hope this version ends up being involved in a government conspiracy or something instead of just being a serial killer...except that presumably Holmes would know if there was some connection between the victims. It's the same problem I have with Sherlock and other Sherlock Holmes adaptations: either Holmes ends up looking not as brilliant as he should, or Moriarty ends up looking like a thug whom I can't stand to see glorified as if sociopathic behavior should be admired if it's clever enough. On a happier note, here are some photos of the neighborhood deer whom we saw coming home from Mason Neck Park last weekend: 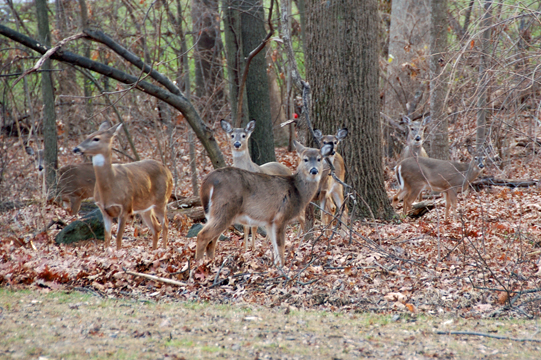