We had snow forecast for Thursday -- initially 3-5 inches, later reduced to 1-2 inches, and ultimately a promise of flurries -- but we did not see a single flake and the temperature stayed in the 40s. Paul worked from home, in part due to the weather forecast and in part because we were having the house appraised to refinance our mortgage. (I am not sure whether they can reject us on the grounds that it's a mess.)

So we had a rare mid-week lunch with the entire family home, though Adam had been out in the morning for a tech meeting at school and went out in the afternoon to work out. Daniel watched DS9 with me, I folded laundry, I took a walk in the woods and saw five deer. In the evening we watched Lost in Translation (great cast, overrating directing). Here are some photos of the camel at Mount Vernon being petted by me and kissing Adam: 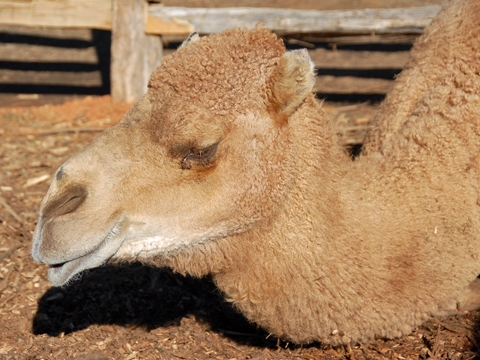