Adam had no school on Tuesday so the teachers could finish report cards and prepare for the next semester, but he went to school for a few hours to work on tech for the winter show. Since it was very cold, I drove him to school, then stopped at the mall to see whether I could find some Ravens souvenirs, though our mall is apparently so fixated on the Ravens that I could only track down stickers (though if anyone wants an RGIII shirt, they're not only in the Redskins store but in several sneaker stores as well). I had no better luck at CVS. Clearly I shall have to go to Baltimore before the Super Bowl.

The rest of my day was not exciting apart from my new Nikon D7000 getting delivered! I have not had a chance to play with it (or even to charge its batteries) since I had to go pick up Adam as soon as it arrived, but that's what tomorrow is for (along with laundry and some unenthralling work). In the evening we watched The Iron Lady, which I thought had much better performances than its screenplay and some odd directing choices but it's worth seeing, then this week's Once Upon a Time which we'd missed on Sunday for football.

Here are some photos from Rockville Cemetery taken in December when we went to visit the Glenview Mansion, which is part of the same public park. You can see the names of many famous local residents on the tombstones -- Magruder, Bradley, Bowie, the mausoleum of the Pumphreys who still run a Rockville funeral home -- but the two I find really interesting here are the headstone of the Bealls, one of the families for whom the Beall-Dawson home is named (more on them tomorrow), and the one for Major Howard Bowie, who died in 1949 and has a double headstone with a blank side...I would love to know the story there, whether his wife remarried or whether she is still alive in her 90s. 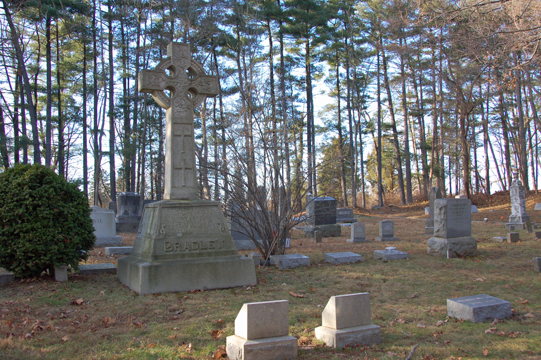