Thursday started with one inch of snow and two hours of school delay, plus a quick drive in the cold to give Adam the lunch he forgot, but it otherwise held nothing but work and chores. Paul worked from home except for a farewell lunch out with a long-time colleague who was let go earlier this year by their company; on the way home he rented a rug cleaner so I could attack the post-sick cat carpet even more aggressively. The highlight was an hour on my knees under the dining room table vacuuming with a hose because the vacuum itself wouldn't fit and the table's too big and heavy to move.

News involved being pissed at Virginia and New Mexico over the racism of redistricting and misogyny of trying to force rape victims to carry fetuses to term, plus laughing out loud at the news that J.J. Abrams will be giving Star Wars the reboot treatment -- with Disney producing, can it possibly be worse than what Lucas himself did in Attack of the Clones? Evening TV was this week's DS9 episode, then the still-extremely-enjoyable Beauty and the Beast on which I like pretty much every character. Here are some photos from the gardens at Maymont in Richmond, which we visited with Delta in December: 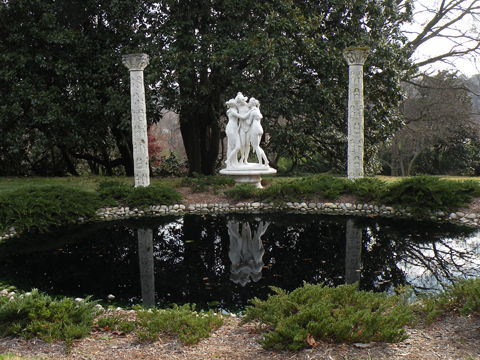