It has not been the best of days around here. I spent the morning using the Rug Doctor to clean up all the parts of the carpet I didn't get to on Thursday while Paul had conference calls about his company's new year changes. Because of the snow forecast, schools closed at lunchtime, so I picked up Adam and Maddy -- who is just getting over the flu that caused her to miss school earlier in the week. Since they were in the house, I let Paul go out to get toilet paper and cat food in case of unexpected major snow, and spent some time chatting with Maddy's mother when she came to pick her up.

We only got the inch or so forecast, but Adam caught the flu and spent the afternoon and evening horribly sick to his stomach. While it snowed, I cleaned out some stuff from Daniel's closet and posted a review of DS9's "Facets". We watched the new Nikita episode, then two fantastic episodes of Shakespeare Uncovered, the one on the Scottish Play hosted by Ethan Hawke and the one on the comedies hosted by Joely Richardson. Adam watched a bit of the latter when he couldn't sleep and eventually fell asleep, perhaps from boredom! Here are some mice from an Ellicott City window display: 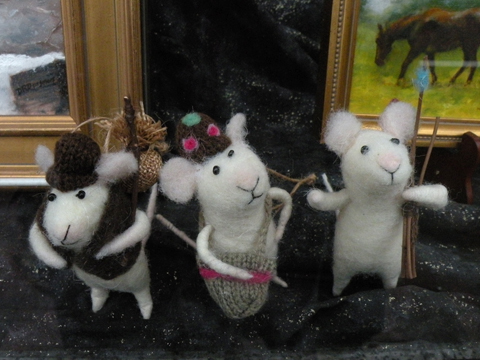