I don't have much to report from my Sunday that's any more exciting that my report on Saturday. Adam is feeling much better, which is good news; he ate fairly normally albeit cautiously all day, and we are hoping for his sake that the schools are delayed for the weather we're supposed to get in the early morning hours so he can sleep in. He even came out to Target with us, where I bought an organizer for the closet (the cardboard one had finally disintegrated) and lost a bracelet when the clasp somehow came loose. The rest of the afternoon was spent assembling a lamp and moving clothing into the new organizer.

We watched the SAG Awards, including the red carpet show, which was a long slog for a brief glimpse of Russell Crowe and Hugh Jackman. I don't have super-strong opinions about who should be winning the acting trophies (I love all the Oscar frontrunners, Day-Lewis, Lawrence, Jones, Hathaway, though I love many of their competitors too). But I think Spielberg and Lee were robbed by the DGA and Producer's Guild even if Affleck was deprived of an Oscar nomination he probably deserved; I have a bunch of issues with Argo's screenplay, which jumps the shark when action movie cliches start overtaking the historical drama.

Since I have no thrilling new weekend photos, here instead are photos of the Band Kamp van, which lives on top of the Art Warehouse building on Randolph Road and. Band Kamp offers music lessons and recording opportunities for kids and has facilities that can be rented for parties and private concerts. I just love looking up and seeing all the hippie colors. 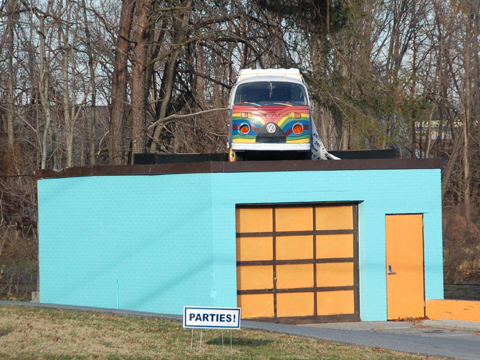