We didn't get any snow worth reporting, but because freezing rain and flurries fell in the early morning, Adam yet again missed a couple of hours of school. Since he is by his own reporting only about 80% recovered, that was just as well. Paul worked from home so he didn't have to drive to work in the winter weather and helped me clean the furnace filter and afghans -- hopefully very soon I will not have to report on post-sick-cat cleanup measures. I worked from home too, and my only expedition out was to retrieve son after school, which was fine because it rained most of the day.

At lunchtime I watched a bit of the Ravens rally from Baltimore to send the team off to the Super Bowl; in the evening I watched the Dallas season premiere, which makes me hugely happy on so many levels, not least because Elena is all the brains in Ewing Oil and Sue Ellen and Ann bonding is awesome. It is going to be awful however they write Larry Hagman off the show (I'm hoping J.R. doesn't die but simply disappears, leaving chaos in his wake) and if Victoria Principal won't come back to play Christopher's mother, I am hoping that Rebecca's mother (played by the original actress) will show up instead!

Here are some photos from Meadowside Nature Center, at the ruins of Muncaster Mill which are a half-mile hike through the woods to the overpass where the road now goes right past them: 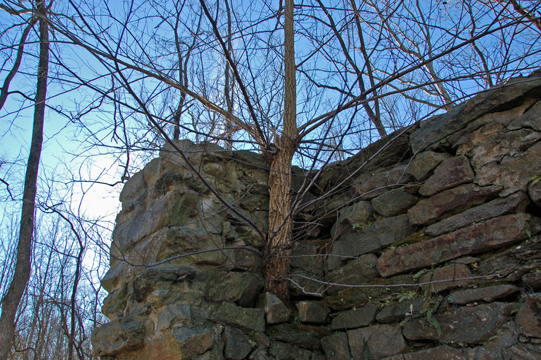