Thursday was not a super-exciting day. After getting some work done in the morning, I went out looking for throw pillows, this time at the home goods sales at Macy's and Sears at the mall. I struck out completely, particularly since my first choice of store, the mall's Crate & Barrel, is now gone; it seems like 1/3 of the storefronts in the mall, even the terrible Baker's Shoes that has been there for as long as I can remember, are now empty. At least the Godiva store is still there, at least through Valentine's Day.

I did get to see a bunny in the woods, always a good thing, and Adam's friend joined us for dinner in his new Joe Flacco shirt. Evening TV involved a very enjoyable episode of Beauty and the Beast in which I thought they were engaging in a certain character cliche which they then turned on their heads, then Elementary in which I spent the entire episode utterly petrified not that someone was going to get shot but that Sherlock would eat his pet turtle in soup. (On "edgier" Sherlock, I'm sure he would have.)

Here are some photos of the B&O Railroad Museum in Ellicott City's huge Lego holiday train display, which ostensibly replicates parts of Ellicott City itself. I am not sure why a kraken is attacking the town, nor why Spider-Man lives there, let alone why Ellicott City might have a Liberty Bell, some knights, or a Knight Bus, but there are lots of other fun details: 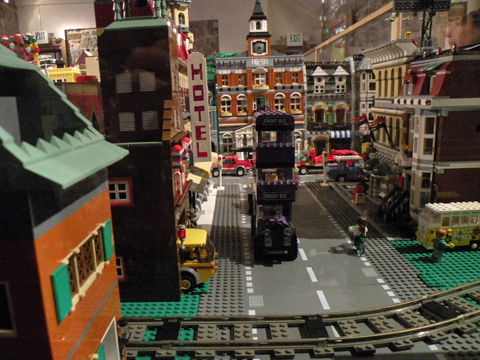