We had flurries in Maryland for quite a bit of Saturday, but very little snow stuck. At least the weather prevented the groundhog from seeing his shadow. Since it was cold, we had an early weekend lunch and went to Baltimore -- first to the National Aquarium, which was very crowded and somewhat disappointing since the rays are gone but Blacktip Reef isn't open yet and it's no longer possible to see the dolphins with their new disorganized visiting times, then to Harborplace to look at Ravens merchandise, since the entire city is decorated in black and purple and there were lots of people wearing hats and sweatshirts, a lot of team pride all around.

We drove home in more flurries and brought in pizza for dinner, then watched X-Men: The Last Stand, which none of us had seen before, having been less than enthralled with X2. I wasn't enthralled with this one either -- it's hard not to root for Magneto since McKellen is so much more compelling than most of the other actors and his dialogue is so much cleverer than Jackman's. Older son wanted to watch Voyager afterward, so we are watching some bad second season episodes. I tried out my new camera, which I am still learning to use, but before I post any aquarium photos, here are a few of Baltimore for Super Bowl Sunday: 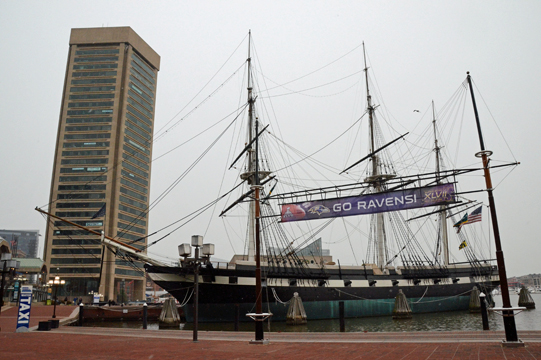