We started Super Bowl Sunday with a late breakfast while Adam was working at Hebrew school, then picked him up from my parents' since he went home with my mother afterwards and took him to Dick's Sporting Goods to get him new running shoes (and peek at the Ravens merchandise). We also stopped at a very crowded Whole Foods, where everyone was apparently stocking up for Super Bowl parties. Then we came home and Daniel and I watched some Voyager until it was time to go to my elementary school friend's annual Super Bowl party, which she and her husband have thrown for the past many years. There is always lots and lots of food -- I had a segment of veggie sub, some French toast casserole and lots of desserts.

I'm sure I have mentioned here before that I offered the Powers That Be a deal in November: if Obama won the election and gay marriage passed in Maryland, I would not complain about any sporting event, award show, etc. for an entire year. I kept my part of the bargain when the Nationals and Orioles blew it in the baseball post-season, when the Redskins lost in the football playoffs, when Tom Hooper did not get an Oscar nomination, etc. So I was really trying to keep a lid on my Ravens excitement as they won their division and then the AFC Championship, and I wasn't going to get hysterical over the Super Bowl even if they started losing right from the start, even though I think Flacco has never gotten the respect he deserves and I love Brendon Ayanbadejo's marriage-for-all campaign.

As I'm sure everyone knows, that is not what happened: Baltimore had a commanding lead at halftime, when we stayed to watch Beyonce at my friend's house, and they had just scored again when we left the party just as the power went out at the stadium. During the long delay, Paul drove Daniel back to College Park, and I was chasing cats out of each other's dishes when the game finally resumed. As I'm sure everyone also knows, the 49ers then played some extremely fine football, thus providing the most stressful and exciting fourth quarter in Super Bowl history. But awesomely enough, the Ravens clung to victory and now we are all very happy, as this is a nice bonus to the election results! Here are some photos from the party: 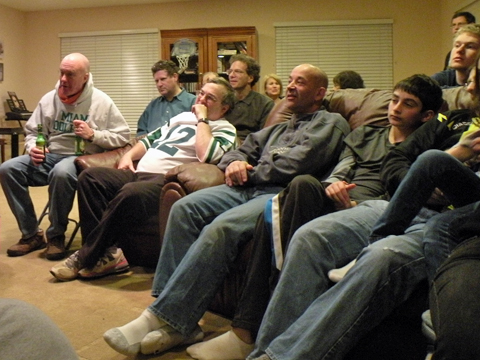