It was a catch-up and chore day, with quite a bit of time wasted laughing at Super Bowl and power outage memes that I missed yesterday since the internet is just too big to catch them all (highlights: Keith Olbermann blaming Downton Abbey for the blackout, Variety claiming it was Johnny from Airplane yanking the plug and bwahahaing, The Onion saying the Harbaugh Boys missed the entire game because they were solving the Mystery of Smugglers Cove). Between that and reading about how they proved that bones found in England are almost certainly those of Richard III, I lost most of the morning. (Jon Stewart just called the sporting event the "totally non gay all male tackle-fest.")

As for the afternoon, Adam (who forgot his lunch which I had to drive to school for him) went running for the first time in a week and concluded that his foot was not just sore, but might actually have a stress fracture, which we're going to try to get looked at tomorrow. In other news, the robins in our neighborhood apparently listen to the groundhog, because there are suddenly dozens of them. After dinner (leftovers) we watched Dallas, which I enjoyed obscenely as usual, then a special about Chihuly's early work on PBS. Here are some photos of the eagles, herons, vultures, and other birds at Conowingo Dam a couple of weekends ago (none great, sadly, as I was just getting used to the big lens): 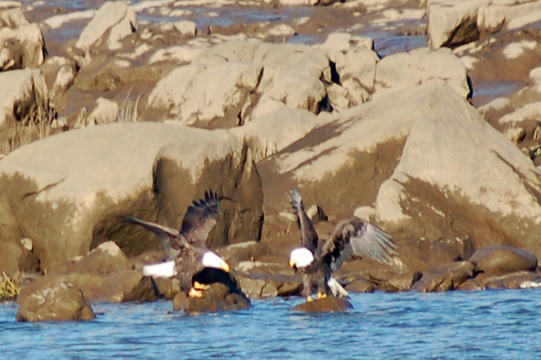