Tonight my excuse for distraction is Mumford and Sons in concert on Showtime, which is awesome -- and earlier it was Troy, which I was having an urge to watch for some reason (well, several reasons including Bean, Bloom, Bana, Burrows, et al). Earlier we had dinner with Adam and Maddy, the latter of whom I hadn't seen in about a month -- she brought us a belated Chanukah present -- and took them to paint pottery at a local store while I ran out to the mall for a bit of Valentine's Day shopping and the last day of Bath & Body Works' buy-two-get-one sale.

Adam's foot is still hurting too much for much walking, so we went to Great Falls in the afternoon, where Paul and I walked along the canal and over the bridges to the river while son biked first up to Swain's Lock, then down to the Old Angler's Inn before returning to meet us. He got nearly straight As and Daniel made Dean's List, so we are all pleased about that! Here are a few Great Falls photos, taken with the little camera because it was too cold for me to fight with the big one (not that I'm complaining, New Englanders!): 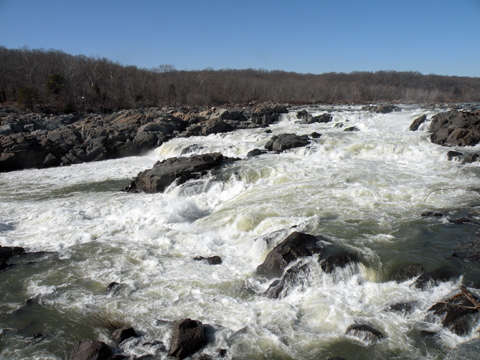