We had a fairly quiet President's Day, since it was cold and Adam's foot is still sore enough that he didn't feel like doing much walking. I did some reading in the morning. We had lunch together -- Adam was teaching himself to make banana ice cream and peanut butter cups with whey protein -- then Paul and I went out to do a bunch of shopping, including the food store, the pottery store where the decorated animals made by Adam and Maddy last weekend were ready to be picked up, and the pet store for kitty litter, where I stopped to admire the reptiles: 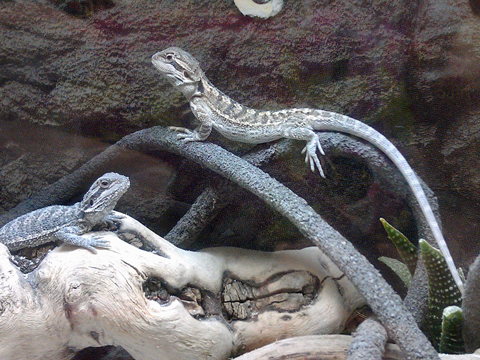 Evening was fairly uneventful as well, since laundry day and garbage day have both been delayed a day due to the holiday. We watched this week's Dallas, during which J.R.'s awesome scene with Sue Ellen made me very nostalgic and so sad that there won't be any more, then the UConn-Baylor women's game, which I didn't care about much but my father-in-law had been awaiting as a highlight of his birthday -- whether he feels the same now that UConn has lost, I don't know. The most presidential thing I did was to admire photos of the Washington Nationals mascots as they reached Mount Rushmore!
Collapse