Another quickie because I got to spend another day with

dementordelta after our Oscar night sleepover. We were going to be lazy all morning but younger son forgot his lunch (again), so that had to be dropped off at school. Then we watched the Trevor Nunn production of Oklahoma starring -- wait for it -- Hugh Jackman, which

apaulled had tracked down on DVD from the public library (he also came home to check in on deck repairs and half-watched the second half with us, plus ate some of the pizza we ordered for lunch.

After Hugh, we decided we needed to see Russell Crowe tied up in Heaven's Burning and just adorable in Cinderella Man. I am fond of the latter despite some issues with how Max Baer is portrayed, but despite the violence I actually think I like the former better -- it sidesteps all the typical American film noir judgments of women with independent sexuality and makes the heroine complex and likeable. Finally, we watched Russell's Inside the Actors Studio, which I have blathered about at length nine years ago.

I have a bunch of feelings about the Oscars, McFarlane, why a film like Argo would beat Zero Dark Thirty, and what gets called sexist versus what does not -- it's so easy to shout about the created-to-be-offensive "We Saw Your Boobs" along with everyone else in the world, much rarer to hear shouting about the rampant sexism from popular hosts like Billy Crystal, Steve Martin, etc. -- but I am too tired to be coherent and I am in squee mode anyway. Here are some cardinals we saw along the C&O Canal the weekend before last: 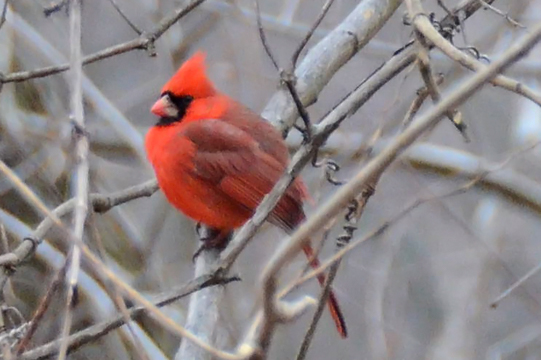