Was doing ten things this evening so had no time to write a journal entry, and now Dreamwidth is being strange, so I shall be very brief. Paul worked from home, we had lunch together, I posted a review of Deep Space Nine's better-than-I-used-to-think-it-was-but-still-not-great "Indiscretion". Adam sent Maddy here to wait for him while he was at track, so we chatted for a while, then we all had dinner with my parents, who had Nic-o-Bolis delivered via Washington Hebrew from Nicola's Pizza in Rehoboth and still had chocolate hamantaschen, yay.

We came home and all four of us watched Nikita, which was waaaay too Zero Dark Thirty for my taste. Then, after Maddy went home, we watched Scoop, which had been on my list of Woody Allen Movies I Just Didn't Want To See -- I have major issues with recent Woody Allen for reasons I am sure I have documented here before -- but Delta loaned it to me and I decided to give it a pass for Hugh Jackman, who was enjoyable in it though I am appalled to say that Woody Allen's character made us laugh the most, since he gave himself all the best lines ("I was born into the Hebrew persuasion, but at some point I converted to Narcissism"). Some Great Falls pics from a couple of weekends ago: 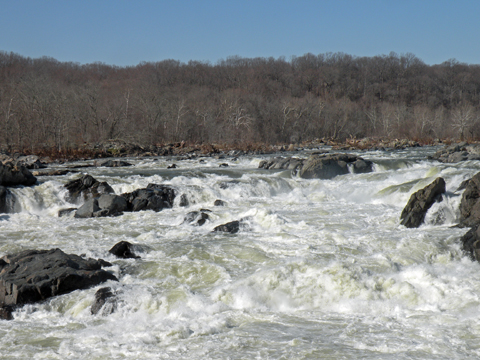