vertigo66 for lunch. By the same time tomorrow we are supposed to have more than six inches of snow on the ground. Our neighbor's daffodils, which are no longer just buds but blooms, will not be happy. (Adam will, since he is likely not to have school.) Anyway,

vertigo66 and I had a lovely lunch at Tara Thai -- we compared notes on Teen Wolf and Les Mis fandom respectively and avoided sequestration. Then I stopped in Bath & Body Works (five soaps for $15), Target (blank CDs and laundry detergent), and Charming Charlie (hey, the ring was on sale for $6).

Paul was working from home in case the deck guys needed anything -- it's about 80% done but the snow will likely stop any work tomorrow -- and younger son was at spring track tryouts (he made the team despite the injured foot and the orthotics, yay!). We watched PBS's Legends of Folk Greenwich Village episode, then Smash which despite Big Name Guest Star smells more like shark every week -- whose brilliant idea was it to have the men want the feminist version of Marilyn's story while Julia gets pushed by a male dramaturg into writing about the men in Marilyn's life and decides that that's actually the more important story. UGH. Here are some of Lake Needwood's ducks from last weekend: 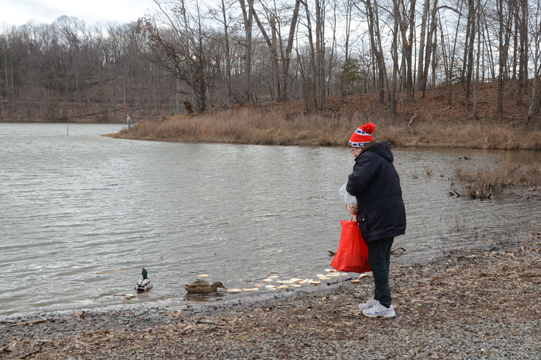