What minimal amount of snow was left from Wednesday melted Thursday, which was a really gorgeous day in the DC region -- and a good thing too, since our deck had to be finished enough to be photographed by the inspection people for the bank to sign off on our mortgage refinancing, so the sliding doors were open quite a bit, much to the chagrin of the cats (though the bunnies were out when I walked, so spring must be coming and the snow must not have done too much damage, yay). The deck looks great -- still not quite finished, that will happen Monday, but it is a relief to have it mostly done, and the inspector has come and gone so now we'll try to set a time for closing.

In the early morning I took Adam to the orthodontist to get his new lower retainer, which he'll have to wear till he stops growing. His teeth were sore in the evening, so although his school was having a pizza fundraiser for the track team, we stayed home for dinner, then watched Swordfish, which is even more whacked than Australia and more offensive too -- gratuitous topless Halle Berry I can live with, but nonconsensual oral sex and stacks of dead bodies, ugh. Here is a falcon (I'm pretty sure it's a peregrine) we saw outside the Smithsonian's Natural History museum last weekend, not sure what it's eating and don't want to know: 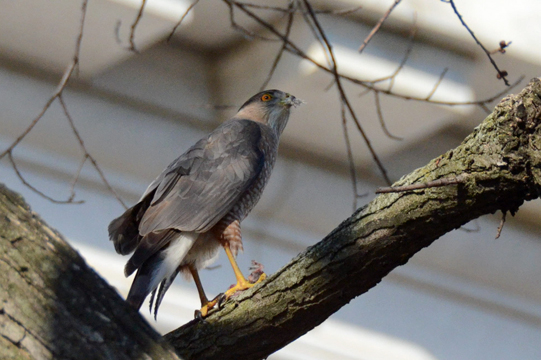