I woke up quite late Sunday because of the time change, so all day I have felt like I was missing more than an hour, but the weather was so magnificent that it felt appropriate to have changed the clocks because there were signs of spring everywhere -- crocuses and daffodils in the neighborhood, squirrels on the new deck trying to mooch food. After Adam was done working at Hebrew school we picked him up and went to hike at Riley's Lock, where we went to visit the dug-out quarry from which the sandstone to build the Smithsonian Castle was taken and the remains of the Seneca Stone Cutting Mill off the C&O Canal towpath. The spring peepers and turtles were out in force after being absent from all local parks just one weekend ago (my frog photo is terrible, but I wanted to commemorate the first frogs of the year)! 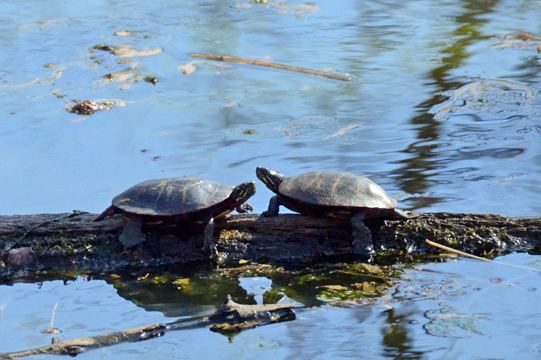 After walking a bit along Seneca Creek so younger son could find a tree to climb and watching some of the people fishing off boats, we came home for a while, then went to California Tortilla for dinner before taking Daniel back to College Park after dropping Adam back at home so he could finish a Chinese project. We watched Once Upon a Time, which I must confess I'm not enjoying at all these days -- I want a flying brick to hit Snow in the head before she can launch into another sanctimonious speech about Good while being just as selfish as any of the Evil characters and I want Regina to become her old self-confident self -- then we watched a PBS special about Oscar Hammerstein complete with clips from most of his shows and movies based on them, hosted by Matthew Morrison, which was utterly fantastic.
Collapse