Our deck is finished and our mortgage has been approved -- we close this week -- so that is two big home issues I no longer need to worry about! The deck looks great, though it still needs to be sealed -- they said we should wait a couple of months to let the wood season -- and the squirrels are already running all over it trying to figure out a way to get to the bird feeder. I like the guys who have done the work -- the company co-owner is from Peru and we were talking about immigration and religion while he was sealing the screen door edges. Paul worked from home and we had lunch together when we weren't on our computers in separate rooms.

We had another day of extremely gorgeous weather and I saw three deer (two does and a young buck) in the woods. Have I mentioned how much I love daylight savings time and being able to walk later, while younger son is walking the neighbor's dogs? After dinner we watched a special about comets, then we watched the funeral of J.R. Ewing, which was very sad, far more because of Larry Hagman's death and the fact that it was obvious Linda Gray and Patrick Duffy were really crying than because of the show, though I thought they gave J.R. a fine send-off (lots of Dallas and Knots Landing guest stars plus a bunch of real life celebrities including Jerry Jones and Mark Cuban).

Here are some photos of the ruins of the Seneca Stone Cutting Mill by Riley's Lock: 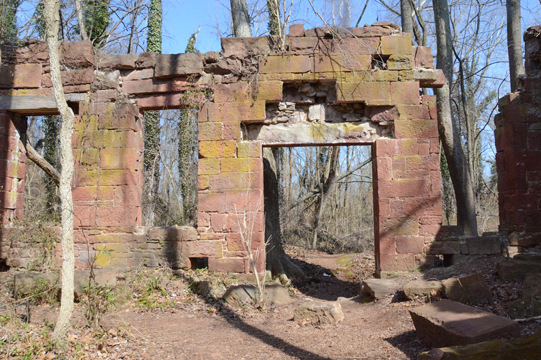