Snow was forecast in the area from midnight to noon on Monday, so I postponed my plans with Delta till Thursday and warned older son that we might be stuck in the house on his first day of spring break. As it has all this winter, however, "snow" meant that flakes fell for maybe half an hour and nothing accumulated at all on the ground, not even on the grass; a bit collected on the trash can lids, but that was about it. Having been warned, however, Daniel stayed up half the night and didn't get out of bed till after noon, so we didn't go out to do anything exciting anyway! Since I was home, I did laundry and various other chores.

We had bagels together and watched The Prophecy because it was a "sitting in your basement sulking over your breakup with the boss" kind of an afternoon. Adam, who had a big AP World test Monday that kept him busy studying all weekend, had track practice after school. We had Indian food for dinner, then watched Dallas, which isn't quite the same without J.R. but still has plenty (Linda Gray, Mitch Pileggi, Knots Landing guest stars) going for it. Then we tried to watch Bates Motel, but I'd had enough at the halfway point and switched to a South Park rerun. Here's Discovery at Udvar-Hazy, including the tiles Enterprise never had: 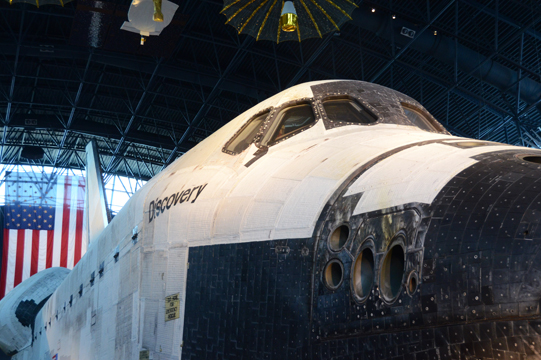