Happy Ostara! I promised Daniel Indian buffet while he was home for spring break, so on Wednesday we picked up Paul and went to Minerva, which had several desserts as well as lots of the usual good stuff (sambar, saag paneer, dal makhani, naan, some kind of tandoori eggplant that was awesome, and the other two aren't vegetarians so they had chicken and other things). I dragged Daniel on a couple of shopping chores on the way home, but otherwise that was our big excursion of the equinox, though I did take a walk and see a bunny in front of our neighbor's daffodils.

We had shawarma for dinner with Persian rice for Nowruz, the Persian New Year (none of us is Persian but Jews in Tehran celebrate it, which is good enough for me), then we watched some NCAA basketball before The Americans, which is very well-written and well-acted and always leaves me very agitated so I wish it was on earlier in the evening though it is very much a 10 p.m. show. It's not a 'shipper-friendly show, since absolutely everyone in a functional relationship is in some way using the person they're with. Here are some photos of the beaver dam network at Lake Needwood last month: 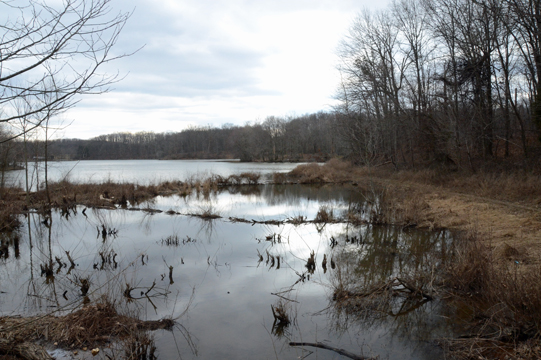