That poem is in honor of the fact that we woke up on March the 25th -- the first official day of younger son's spring break, several days after the equinox -- to the most snow we've had sticking to the ground all year. We got very little on the roadways because of the warm ground temperature, though there were nearly two inches on the branches and decks at one point. It continued to snow for most of the morning, turning to slushy rain in the afternoon. My in-laws in Pennsylvania got over four inches and decided not to drive down to celebrate Passover with us because their roads were slippery.

We had a pretty quiet chore day (Paul working from home, me working on articles and laundry), then we retrieved Daniel -- who had to go back to College Park last night as his spring break had ended and he had a class he really couldn't miss, which did not get canceled despite the snow -- and went to my parents' for the seder. They had friends over with a daughter a bit younger than I am and we talked about travel, movies and basketball after the (thankfully mostly singing-free) service. I ate way too much charoset, carrot souffle and chocolate roll, yay! Some pics from the day: 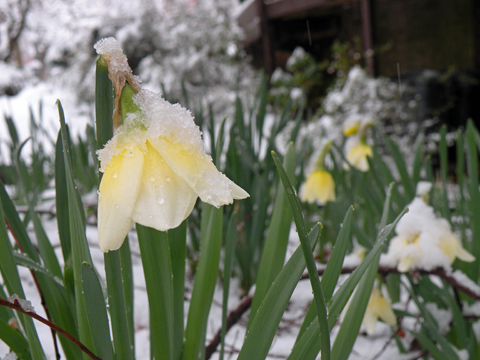