apaulled's parents when they lived in Hartford, which is where we are spending the night so we can visit the University of Hartford in the morning. It was chilly and drizzled a bit but there is less snow on the ground here than there was when we left Maryland. We paused to eat sandwiches at a New Jersey Turnpike rest stop, then spent an hour in Paterson to see Passaic Falls along the river fault line -- the town also has wonderful original buildings and the guy who works at the cultural center clearly thinks it is the best city in the U.S., which is always very entertaining. A few photos of the falls and power plant: 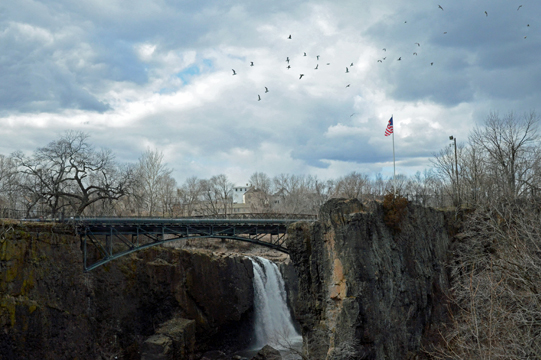 We got into Hartford around dinnertime and went to meet

half_elf_lost and her family (both of us minus our eldest children, who are at college) at nearby Puket Thai, which has an enormous vegetarian menu and fantastic peanut sauce, red curry, yellow curry, and pad see ew (everyone eating meat seemed happy too). The kids discussed running track and video games; the adults discussed schools, politics, museums, TV shows, and why some people who do not think Hugh Jackman is appealing should give him another chance because other people who felt that way a few months ago have had reason to reassess his awesomeness.