Thursday morning started much like Wednesday, with Adam getting up to go running, though since the Cresthill Suites had a fairly nice gym he did it on the treadmill. Then we had breakfast and went to Syracuse University, first going to a general Q&A where we ran into Toby Morse and her younger son -- I've known her since before he or Adam was born, she invited me to a baby group when our older sons were newborns. We took tours of the campus, which is quite pretty though every single building seems to have a different architectural style. After lunch we went to an information session at the Newhouse communications school, which is extremely impressive both in terms of its facilities (we even got to watch a student horror movie getting its sound effects) and its internships and networking opportunities. I believe it may be Adam's first choice at the moment, though we haven't been to Rochester or Ithaca yet, let alone anywhere south of DC. 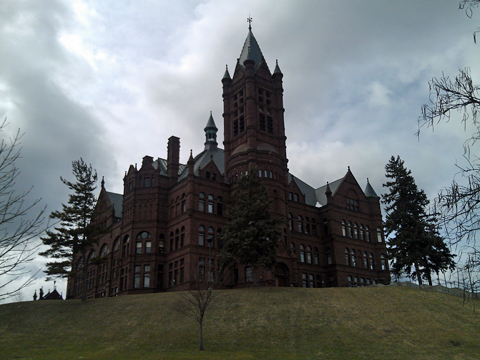 We ate lunch at the local Chipotle between the general campus and Newhouse tours and left campus in the late afternoon to drive to Rochester. We went into the city to see Genesee Falls, right in the middle of the city with fantastic views from the Pont du Rennes footbridge, and the wonderful ruins in the Brown's Race district, including what's left of Triphammer Forge and Phoenix Mill, plus the High Falls Heritage Area Visitor Center in the Brown's Race Market building. Then we came to the Microtel just outside the city, which is not as nice as the Cresthill Suites but has a microwave where we had leftover cassoulet for dinner, watched Beauty and the Beast which had great stuff happen this week, and now we are watching the Syracuse-Indiana game which I am kind of hoping Indiana wins because the entire world may apply to Syracuse if they become the NCAA champions this year!
Collapse