The only excitement of my April Fools Day involved online jokes -- Google Nose not all that impressive, but The Telegraph's story about Cameron Mackintosh commissioning a Les Mis-style musical based on Cameron and Clegg's failed romance and Shatner and Takei's competing claims about being cast in the Star Wars movie were funnier. Otherwise, I ran out to CVS while Adam and his girlfriend were biking to lunch and I walked around the neighborhood taking photos of bunnies and daffodils because it was too gorgeous a day not to enjoy the spring.

Evening involved getting laundry folded while watching the Les Mis DVD specials (I have suggested the Jackman workout to son, who thinks the chains might be overdoing it), then faux sausage and shells for dinner, then Dallas which this week had more teasing about Pam even though Victoria Principal swears she's not returning, plus Lee Majors showing up and romancing Sue Ellen (if she can't be governor of Texas, I approve of her dating the Six Million Dollar Man). Here are some photos of Taughannock Falls from both the overlook above the park and the trail to the base of the falls through the woods: 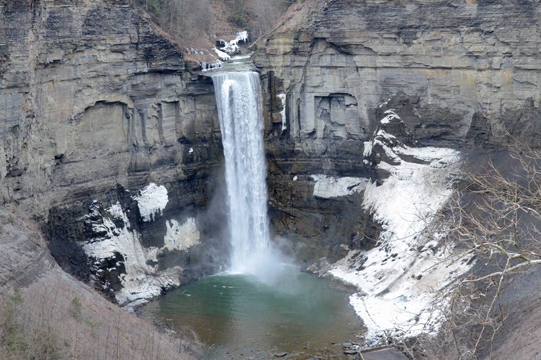