Wednesday was yet another catch-up day, though I got quite a bit of work done so it was not a loss. Plus it was beautiful out but not too warm, so I was not tempted to run away and spend the entire day outdoors, though I did take a walk to see whether any of the neighborhood cherry blossoms were opening (they're not, nor are the dogwoods, but the redbuds are lovely and there are daffodils everywhere). I had to run out to the mall, which now has an Urban Outfitters -- only 30 years or so after I stopped caring! It was a mixed day in news. The Maryland House of Delegates passed gun control legislation but the Baltimore Ravens released Brendon Ayanbadejo, who lobbied for gay marriage in the state, and North Carolina Republicans announced a plan to make Christianity their state's official religion which they claim the Constitution gives them the power to do.

Now that the Terps are out of both the NCAA (women) and NIT (men) tournaments, I couldn't care about basketball and am glad baseball season has started. The Nationals won, the Orioles lost; also I see that Rutgers finally fired their abusive coach, but college sports are still looking pretty pathetic -- in related news, Adam had his first track meet of the spring, a sport that's much less stressful for parents. We caught up on the Nikita episodes we missed while traveling, and The Americans won the Wednesday night TV dilemma for the first time over Nashville -- they're both available On Demand, but it was the spy show we really wanted to watch when it aired. Here are some photos of the Tripphammer's Forge ruins in the Brown's Race district in downtown Rochester -- much of the building burned down in 1977, exposing the 25-foot water wheel and water turbine: 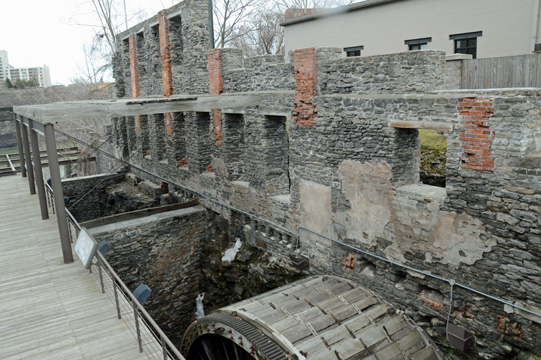