The temperature on Monday was nearly 80 degrees and it finally felt completely like spring -- we even had yellow jackets in the little flowers in our front yard. I had to do a bunch of chores out of the house, including a stop at the thankfully-nearly-empty post office (I was worried because it's so close to tax day, but I guess next Monday will be the horrible one). I also had a Charming Charlie coupon that was about to expire and I really wanted their cherry blossom necklace, so I walked around the Washingtonian Lake to see the forsythia and talked to the geese while I was up there. I was sad to read about the deaths of Lilly Pulitzer, Annette Funicello and Margaret Thatcher -- regardless of anyone's opinions on socialite fashion/Disneyfication/Tory politics, they all broke ground for women in different spheres.

There was a two-hour Dallas on, which thankfully started at 8 so we missed almost none of the basketball championship -- I have read that Victoria Principal said she is never coming back to the show so I am hoping we DON'T see Pam, since I don't think I'd accept another actress in the role even if the character originally "died" in a car accident and now I guess was only seriously disfigured. Now, like much of the U.S., we are waiting to see who will pay off in all the March Madness pools (most of my family is rooting for Michigan; weeks ago, on a whim, I picked Louisville in an online contest sponsored by The Pink Palm, a boutique that sells the aforementioned Lilly Pulitzer's clothes and accessories, so it would be lovely if they won and I was eligible to win something with pink tigers or elephants on it!). Local buds and bunnies: 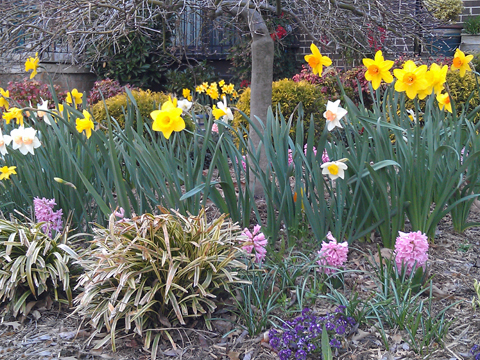