dementordelta and I were pretty thoroughly sheltered from the news nearly all day -- we woke up on the late side, watched the 1935 Les Miserables which in some ways I like better than some of the later ones (has a clever Cosette, politically involved Eponine, Lamarque as a rebel leader, plus Frederic March's handsome Valjean has much to recommend him and Marius a twit as usual). Then we watched Jackman, McGregor and Williams in Deception, which was somewhat predictable but entertaining; Jackman and Judd in Someone Like You, which was way more predictable and mostly worth watching for shirtless Hugh; Crowe and Bale in 3:10 to Yuma, which remains terrific; plus five minutes of Crowe swearing in Broken City and five minutes of Colm Wilkinson in the original staging of The Phantom of the Opera.

Adam was working on a Special Project for his girlfriend's birthday on Tuesday, so he was in the kitchen most of the evening, though I ate very little dinner since Delta and I had pizza late for lunch and I got almost no exercise all day. We had the news on for a couple of hours and were horrified by the situation in Boston -- best wishes to people from the city, people with loved ones in the city, and people involved with the marathon. Then we watched the Dallas season finale, which while uneven had some delightful things happen -- I was hoping for surprise guest stars and a storyline that might address the disease that ended Larry Hagman's life, but I'm not sorry that various Ewing and Barnes storylines wrapped up the way they did. Here are some photos from Bethesda's Kenwood neighborhood, which has more than a thousand Yoshino cherry trees: 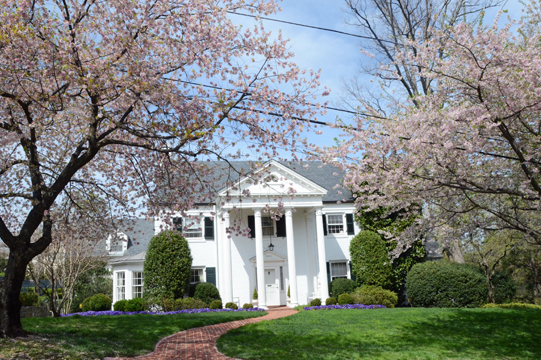