The University of Miami held an information session for prospective students at a local hotel on Saturday, so after Adam went to track practice in the morning, we went to the meeting to hear about their school of communications, which is pretty well ranked (and, you know, Miami is not exactly an unattractive place to spend the winter at college). As with all these things, the video of the campus and academic disciplines was enjoyable, the PowerPoint was informative, and the Q&A made us all want to spork our eyes out -- we ended up leaving early after the second question about a point that had been made twice during the presentation. These colleges really need to learn to take a couple of questions, then tell the audience that the student athletes, people concerned about Greek life, people who want to know about specific study abroad options and other things that everyone else at the information session doesn't need to know should talk to the admissions counselors privately afterward.

We had a lovely late afternoon, though, because after we left the college session (and since I'd seen goslings at Washingtonian Lake a couple of days ago), we decided to go to Lake Whetstone to see if they had any goslings yet too. We walked around the entire lake, including the farm that borders Montgomery Village behind it -- which apparently has llamas now -- and saw two families with more than six goslings each, though they were trying to hide from us so I didn't get an exact count! We also saw several herons in the tree where there are a number of large nests and a great many turtles. After dinner we watched Doctor Who -- I didn't dislike it but I'm having a giant case of "yeah, whatever" this season when I'm not feeling deja vu from other episodes or sci-fi series -- and afterward, because of the ad for the show that was on afterward, we got in the mood to watch The Island, which is also definitely not great sci-fi but it has McGregor, Johansson, and Bean, and it's still vastly better than That Awful Literary Clone Movie from last year. 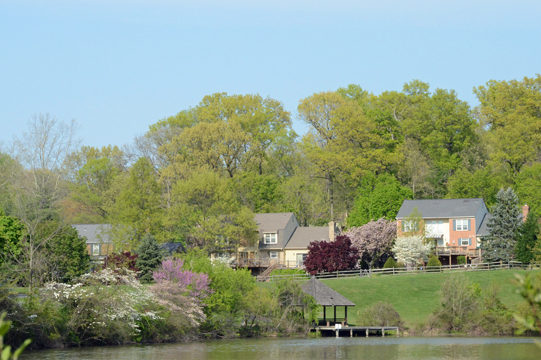