I had a busy Friday, but all good. In the morning I finished a review of DS9's "Return To Grace", the second week in a row in which the writers did Kira wrong, and tried to organize all the photos I took while out of town. Paul worked from home so that in the afternoon we could go to College Park with my parents for the College Park Scholars' Academic Showcase, which was in the alumni center and featured the culminating projects of students from the past semester. Out of more than 450 projects on display at the showcase, Daniel's project on Microsoft marketing was one of seven finalists in the show, as was the project by one of the people he'll be sharing an apartment with next year. 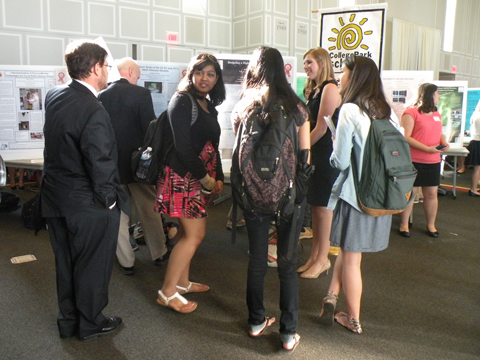 We went out to dinner at Plato's Diner, where half of us had breakfast food and half of us had dinner food (I had a feta cheese omelette, home fries, and veggie sausage, all very good). Then we took Daniel back to his dorm, took my parents back home with us, and chatted briefly with Adam, who is taking the SAT early tomorrow morning. Since we'd already missed Nikita, we caught up on Nashville, which has gotten awfully predictable but I still like the music and all the actors, then Smash, which makes me think I should go back to Glee because everyone acts like immature brats on both shows but at least on the latter they're actually teenagers rather than adults who should know better!
Collapse