It rained all day Tuesday. I did chores, picked up Adam so he didn't have to bike home with a cold in the rain, and worked on a bunch of research/writing that was really fun, but I have nothing else to report from my own day. Instead I enjoyed the same things half the internet did: articles about Delaware voting to legalize same-sex marriage and Leonard Nimoy and Zachary Quinto advertising Audi and singing the Bilbo Baggins song. We had some kind of awesome fake chicken and brussels sprouts with mustard sauce by Paul for dinner, then ice cream with Mystery Sauce since I'm not supposed to know what Adam was making for me for Mother's Day that produced extra chocolate.

Then we watched Moulin Rouge! to prepare ourselves for Luhrmann's Great Gatsby, which I expect to be utter crack, but it's not like Jack Clayton's film doesn't have huge flaws (Redford's too restrained, though he's more my mental Gatsby than DiCaprio, but I can't imagine anyone being more on the nose as Daisy than Mia Farrow). Moulin Rouge! is still utter crack too, perhaps even more so now that I've seen Australia so recently, but I'm less hostile toward Kidman since she divorced Cruise and Scientology, and I adore the staging of the musical numbers though I don't feel much emotion from the excess. But speaking of color and light, here are some photos of the Brighton Dam Azalea Garden: 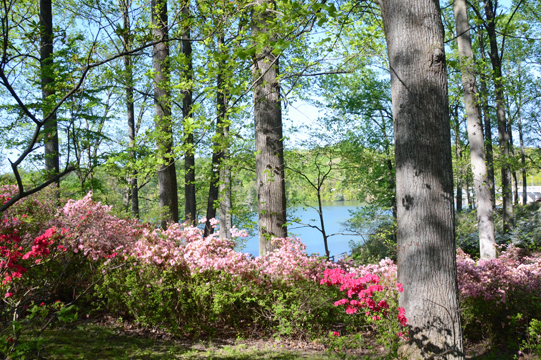