Okay, that's a weird poem to post the day before I attend my 25th college reunion at Penn, but we just got back from The Great Gatsby so it's clearly a Fitzgerald night. I liked it a lot, didn't love it unconditionally but I think that any film version is going to suffer by comparison with the novel because no one is going to cast a Gatsby who fits all viewers' mental image of him -- I thought DiCaprio was fine, sort of a cross between his Howard Hughes and his Jack Dawson, more emotional than Redford in the previous film which is all to the good but he didn't set me on fire. Then again I found Mulligan's Daisy so much more sympathetic than Farrow's that it made up for a lot, though Edgerton's Tom is the truly brilliant performance of the film; I actually felt sorry for the character on two occasions, which has never happened before in any incarnation. ( Collapse )

The rest of my day involved posting a review of DS9's "Sons of Mogh", neither one of my favorites nor one of the series' finest moments, though it opens up some Worf storylines in the future, and going out to dinner before we went to the movie with Paul, Adam and Maddy at Noodles and Co. because Adam wanted pasta before his track meet in the morning which we will miss because we will be en route to Philadelphia. The Orioles and Nationals both won despite the pouring rain in which we drove home. I am rushing so we'll be ready to leave early so here is a photo of a neighborhood cat, more photos next week! 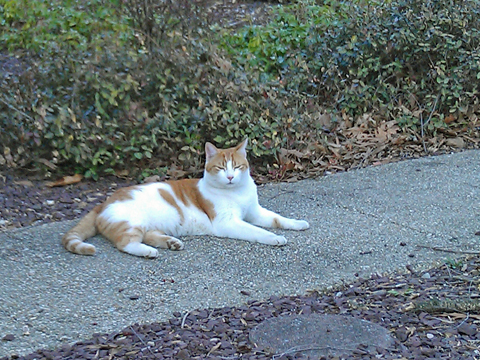