Younger son had the World History AP exam this morning and older son slept till noon, so I had a quiet morning catching up on stuff. Then when younger son got home, we all went to pick up

apaulled and went to Minerva for Indian buffet. When we got home I took a walk (two bunnies, lots of irises), did some research, and read a lot of ST:ID reviews that ranged from "Hmmm" to "Why" to "WTF" (with a couple of "OMG BENEDICT CUMBERBATCH" thrown in, but that doesn't even work for me with Sherlock). In the damning-with-faint-praise department, The New York Times -- which encapsulated how I felt about the first reboot film, "Maybe it is too late to lament the militarization of 'Star Trek,' but in his pursuit of blockbuster currency, Mr. Abrams has sacrificed a lot of its idiosyncrasy and, worse, the large-spirited humanism that sustained it" -- made the hilariously scathing remark, "Abrams will never be Michael Bay, who can make kinetic poetry out of huge pieces of machinery smashing together."

But speaking of Sherlock, and without spoilers, I just want to say that the season finale of Elementary encapsulates all the reasons I enjoy that show so much more. I've heard the argument that Miller's Holmes is less Conan Doyle's than Cumberbatch's Holmes, and that may be true, but Conan Doyle didn't envision a Holmes living in a world where mobile phones and airplanes were commonplace, so it's hard to speak authoritatively on how he'd write a world where women have the same legal, political, educational, and financial power (at least in principle) as men and how his central character would treat women in that world. The version of a particular guest character in Elementary -- one whom I liked much better in the Guy Ritchie Victorian films than Sherlock -- is quite memorable and well-played, and I can't sing the praises of Lucy Liu's Watson enough. Holmes may be the genius but Watson is the character we're supposed to relate to, so having this particular Watson makes me happy in so many ways.

Some sheep and lambs from the Maryland Sheep and Wool Festival a couple of weekends ago: 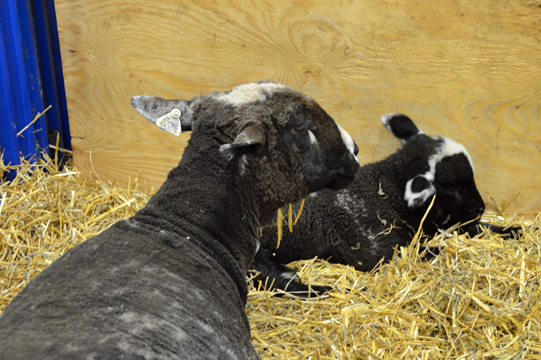