Daniel slept late and spent nearly the entire afternoon Friday playing video games online with friends from school, while Adam had a regular school day after his half-day for an AP exam on Thursday, so it was not an exciting day around here. I posted a review of DS9's "Bar Association"</b> -- not one of my favorites, but pretty much every Star Trek fan in the US is too busy seeing/reading about/blogging about the new movie, so no one will be leaving nasty comments anyway. It was a four-bunny day, possibly because it was over 80 degrees; the azaleas are all wilted, we're moving on to irises and lilies.

We had dinner with my parents (Greek food, which we all love), then came home for the season finale of Nikita, which was terrific until the very end, which then turned dorky, like they wanted a miserable ending to force the WB to renew them (it's getting only six episodes next season and I'd say "That's better than nothing" except that La Femme Nikita's abbreviated final season was so awful that I refuse to consider it canon). Then we watched the season finale of Beauty and the Beast, which I also really liked until the very end, since the Giant Catherine-Related Revelation was projected early on. Brighton Dam Azalea Garden: 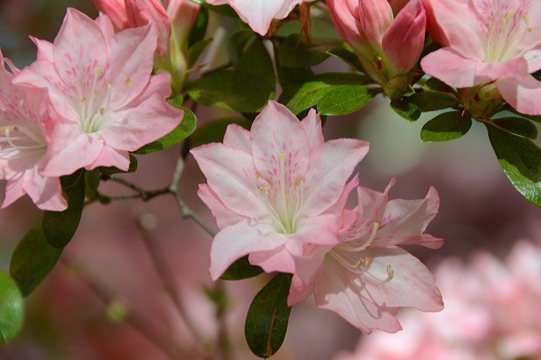