I have spent Sunday in Baltimore with

apaulled. Our original intention was to go to the aquarium, but we left later than we expected and then we saw Michael Rosman (aka the Squire of the Wire from the Maryland Renaissance Festival) getting ready to perform in the Inner Harbor so we stayed to watch him, then discovered that the aquarium was closing early for an event. So we walked around and saw Pride of Baltimore II, which was docked by the USS Constellation, and went into Seven Foot Knoll Lighthouse before we went to Noodles & Co. for dinner.

Then we went to Baltimore Soundstage to see Ramin Karimloo, who is on his Broadway to Bluegrass tour which I can't possibly say enough good things about. He did songs by three different Les Mis characters (and had local kids onstage singing Enjolras with him on "Do You Hear the People Sing"), he did some Phantom and Rodgers and Hammerstein, he did a bunch of folk songs, some Johnny Cash, and some of his own songs. It was a good crowd -- overwhelmingly female but very enthusiastic -- and at the start of the finale he came over with the band to serenade those of us near the back of the venue! 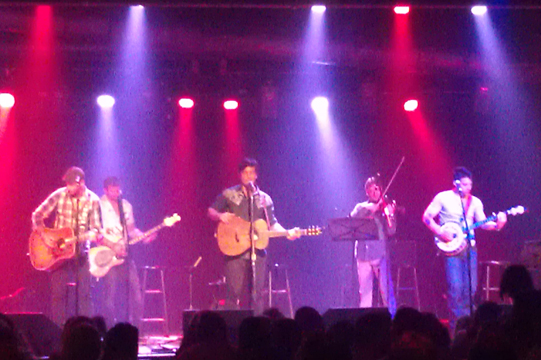