It's been a day of ups and downs -- well, one big down, while the ups were small. Late last night we learned that a classmate of Adam's had died very suddenly, a boy a year younger than Adam who was in his Foundations of Tech class and who'd been in his Chinese class in previous years. All day the school struggled with how to deal with this news; we got a very early recorded call from the principal to say that there would be grief counselors in the building, though there were HSA and AP exams going on so the class schedule was atypical (Adam had neither Chinese nor Foundations of Tech). For weeks the track team had been planning its spring banquet for tonight and couldn't figure out a way to reschedule, so they decided that it would go on, but a student-organized candlelight vigil at the flagpole turned into an administration-led event in the gym, and we got at least four e-mails with conflicting information. Meanwhile I took Daniel out for bagels and attempted to get work and laundry done, since Wednesday we're getting a toilet replaced and I may be busy with that.

We ended up arriving at the school a little after 6 (with Daniel, and fruit salad) for the banquet, which was supposed to start at 6:30 but began somewhat later. At 7, nearly all the kids left the lunchroom to go to the gym for the memorial service, which was so crowded that they were encouraging parents who didn't know the late student to stay outside. We talked with the parents of a couple of the track team kids, and around 8:15 the service ended so that the awards portion of the banquet could begin. As you can imagine, it was a much more subdued event than the cross country banquet in the fall, particularly for seniors for whom their final running banquet had to be bittersweet in the first place. I walked home with Daniel while Adam sat with his friends. There's another memorial/impromptu grief counseling at the Hebrew school tomorrow. I can't even imagine how this boy's parents are coping. Tomorrow Adam has to take a makeup English AP exam -- the school ordered the wrong number of tests -- I hope the kids manage to stay calm and focused for it. 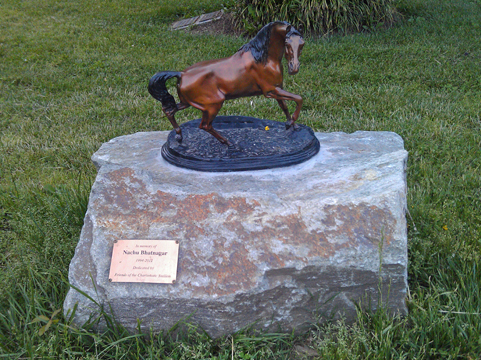 This outdoor sculpture in front of the school was placed in honor of a student who died of cancer last year.
Collapse