I'm not in a happy place so I'm going to keep this short. We got a new toilet in the kids' bathroom installed in the morning; they've needed a new one for a while, but it started leaking the night before last, which was clearly a sign that it was time. Paul worked from home so we could discuss the water heater and kitchen faucet too. Adam was taking the delayed English AP exam (the school screwed up on administering it the day the rest of the country took it); Daniel went out to lunch with my father. Tomorrow Adam is going to a funeral instead of his morning classes.

I also had the great joy of folding Daniel's college laundry. Our cable has been flaky all afternoon and evening -- whether this is because of the storms that are on the way or because Comcast sucks, I can't say -- so the Nashville season finale cut out at several points, including the final seconds when I hear that Something Big Happened but I didn't actually witness it. It was a very soapy episode, but I am sure I will be watching next season for Connie Britton and the music if nothing else. Here are photos from the Morris Arboretum in Philadelphia, which had David Rogers' Big Bugs on display when we visited last month: 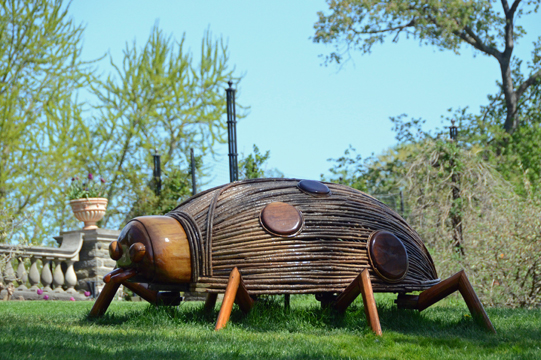