I am very ready for this week to be over. In the morning, Adam missed a couple of classes to go to the funeral of his classmate -- it sounds like half the high school was there, certainly most of the kids who knew the boy from sports or Hebrew school. Later in the day, the local mall parking lot that's been under repair for several weeks, causing mall traffic jams and overcrowded lots, collapsed and killed one of the construction workers. Currently we are under a thunderstorm warning, with loud claps outside, that the barometer in my brain has anticipated all day with headache that would have become a migraine without much-appreciated medicine.

In better news, the Boy Scouts have finally lifted the ban on gay scouts (they need to lift the ban on gay scout leaders, but I'm confident that's coming, particularly now that the Mormons are not fighting it), and the girl who was expelled from school for doing science has been given a Space Academy scholarship by a NASA veteran who also got in trouble for doing science back in the day. We watched the Adam West Batman movie in the evening because we needed mindless hilarity. Here are some photos of ducks that we saw in DC when we went to see the cherry blossoms, whom Paul said must be Valjean and Javert since the latter was chasing the former: 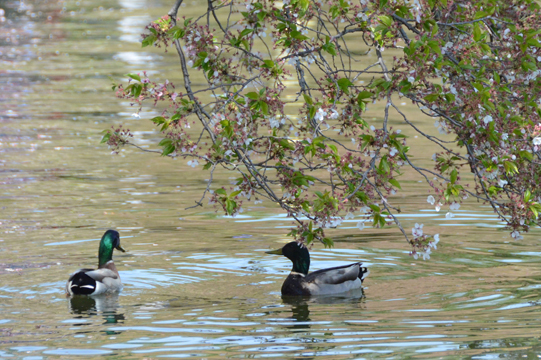