Friday was a quiet day, which I mean in the best way. I got bunch of work done, I posted a review of DS9's "Accession". A Comcast technician came to see if he could figure out why our internet and TV both have been glitching for the past several days; he thinks our router is the problem, though the router can't possibly be responsible for our missing the critical moments of the Nashville season finale and lots of good lines on Stewart and Colbert. We probably need Wireless N rather than the Wireless G we have, based on the number of connections we often have at a time.

We had dinner with my parents, then came home and watched Prometheus, which I didn't find hard to follow as some people complained but that "birth" scene was every bit as horrific as I'd heard. I'm not much of a fan of horror and most of what I liked about the old Alien movies was Sigourney Weaver, so missing future installments won't be a hardship. Here are a few last photos from the Philadelphia Zoo, including cheetahs, a polar bear, a flamingo pretending to be a flower, a snake, some porcupine, and a douc langur -- Philly's is the only zoo in North America with these Vietnamese monkeys: 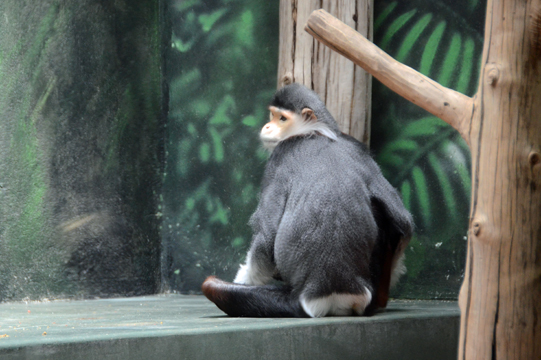